KAMAYA POINT, Bataan – Some 30 percent of the 46,000 seafarers deployed aboard Japanese vessels are Filipinos who have been cited for their work excellence by no less than the current chairman of International Mariners’ Management of Japan (IMMAJ).

IMMAJ chairman Capt. Koichi Akamine, in his speech as guest of honor and commencement speaker at the graduation of 195 midshipmen and women belonging to the second batch of “Empriverion” class of 2018, disclosed this welcome news, as he challenged the graduates to exert their best in their sea world, urging them to maintain and uphold the brand of excellence that Filipino sailors are known for worldwide.

“You are products of MAAP, a notable maritime institution?,” he told the graduates, as he congratulated their parents for their “undying support” in achieving the dreams of the young ladies and gentlemen. Akamine expressed gratitude to Filipino seafarers who he described continue to do a very important role in Japan’s maritime industry of Japan, reiterating that their organization (IMMAJ) “directly” benefits from the graduation of the midshipmen and women, as he expressed high hopes that the near future, more Filipino seafarers would be deployed to work in Japanese ships.

He lauded AMOSUP President and MAAP governing board chairman Dr. Conrado F. Oca and MAAP President VAdm Eduardo Ma. R. Santos for their endeavors and unstoppable efforts in maintaining the stature of MAAP as the leading maritime institution in the Philippines and in the Asia-Pacific region. MAAP is the education and training arm of AMOSUP, founded by Philippine maritime and seafaring industry icon master mariner Capt. Gregorio S. Oca, known as the “Father of Filipino seafarers.” 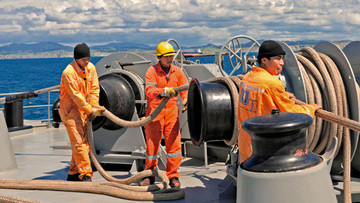